For someone like me – a somewhat ordinary woman – thinking globally has been a relatively new experience. Cocooned in my comfort zone, I spent most of my life commuting between work and home, until work made me travel and explore my own country, quite late, in my early thirties. The nature of my work made me more ambitious enough to even travel to the United States for an advanced degree. It was then that migration, refugees, conflict, disparity, racism sounded like real words for me; but so did globalization, interconnectedness, peace, and justice. In these past two or three years, I have oscillated several times between momentary greatness, reflecting on global issues and my comfort zone; job, home, and family. And then, I got the opportunity to embark on a global citizen journey in my own hometown as an Indian delegate.

So, this diverse crowd of strangers with unknown pasts, unknown political leanings and religious sentiments embarked on a journey to live and travel together for eight days. There would not have been a more appropriate place for our stay than ‘Maher’ – a home for mentally-disturbed women and destitute children. We lived with the inmates under the same roof, yet we were from different worlds and separated by our privileges. However, living close to those women and children gave us the opportunity to understand their lives, know a bit of their past, the ordeals they survived and witness the magical happiness they have created in their home of about 150 family members. Their enthusiasm and hopes are so contagious that one can hardly avoid being affected. We visited more such Maher homes in different villages witnessing the difference Maher made in the lives of so many children. It was overwhelming to hear of the dreams and aspirations of children who would have otherwise lived a life of destitution and neglect on the streets. Some would have begged, some abused, and some would have not lived for long. 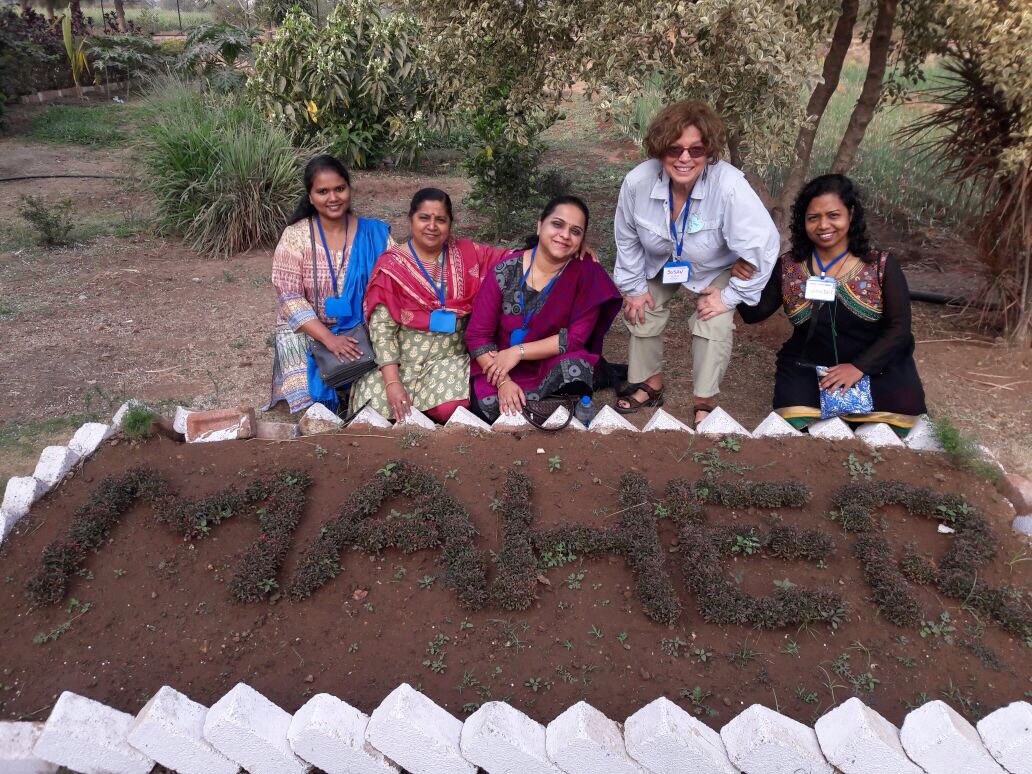 Meena is on the far end wearing a blue scarf and Susan, Founder and Executive Director, is kneeling and surrounded by several Indian delegates.

The GCJ delegation was a motley crowd of eight American women, a young Spanish woman, a young man from Venezuela, a teen from Germany, and nine Indian delegates – six women and eight men – and a wonderful Jewish-American woman leading the team. They were of different age, profession, experience and probably the only thing that was common among them was that they belonged to the same planet, same globe. Though interacting with a person from a different country and skin color was not a new experience for me professionally, but I wondered how it would be like to interact with them on a personal level. How scary would it be to reveal our personal choices, thoughts, feelings, fears and even prejudices? Would they like me? Would I like them? What would we do for a whole eight days together? And then, very gently, we were exposed to the techniques of compassionate listening that soon bridged the distance between hearts, patched up the differences or at least expanded our capacity to accept and include thoughts and people that differed from us. For example, an intense debate on how to fight sexual violence ended in accepting all views from changing the way we bring up our children, being vigilant, self-defense, pepper sprays and even spiritual intervention.

There was so much to learn, experience, reflect and absorb. How could we not have been transformed by this experience? An exercise that particularly comes to mind is when I was paired with a stranger and we had to share our feelings and thoughts at that exact moment and the other person would listen compassionately, without reacting or judging and with full attention. For me, it was a great feeling to know that no matter what the person in front of me said, I had the power to react and make the other person feel listened to without having to react. Many such interactions involved diving into the deepest and some dark corners of my mind and re-surfacing feelings that had not yet died but still buried deep into oblivion. For someone like me who is very selective about what I am sharing and with whom, it was a great churning of emotions and a whole lot of extra effort to open up. It made me wonder how inept I was at openly accepting my feelings, showing my wounds and weaknesses, letting go and being able to talk calmly about the most disturbing facts of my life. Some wounds never heal, but it was nice to have someone to listen to me and acknowledge the pain especially when there was a safe space to open up. It is true that life hardens us as it subjects us to traumas and troubles over time and to protect ourselves from being hurt, we build walls around us – walls of indifference, insensitivity, and aversion to everything that may expose our weaknesses. Special efforts are surely needed to cultivate compassion in hearts hardened by misery and distrust.

There were some light moments as well with cooking and serving Jewish delicacies, American apple pie, Indian street food and some green smoothies by an Indian delegate, who is a passionate proponent of organic farming. Some witty delegates lightened the air by punctuating intense moments with their humor. A dance program with the children and women of Maher, however, stole the show revealing a bit of Maher’s recipe of creating joy by people who once had nothing. Most of us, especially the foreign delegates could not have enough of the beautiful things made at the Maher production house – purses and bags of flamboyant colors and elegant designs, candles, greeting cards and spicy Indian masalas.

Being a learning maniac, I was enthused with the Open-Space Technology and World Café that were on the agenda towards the end. Did I wonder how chaotic it would be when 150 people discussed equity, justice and empowerment in a not so big hall of a local college? But the day dawned to put all my apprehensions and anxieties to rest as a team of Maher volunteers dressed in bright yellow that we fondly refer to as the ‘Yellow Brigade’ made it happen. In no time, 150 people were organized into groups to collectively harvest ideas, dreams, ambitions and plans toward advancing humanity to a more just, equal and empowered society.

Then came the final day, the day of adjourning, that left us marveling at the countless deep interactions we had among ourselves. We would go back into our smaller, individual worlds but not without realizing that all these small individual worlds collectively made up the larger one and in knowing that we are connected. That no matter how different our citizenship, skin color, language or lifestyles were, we share common values of justice, equity and compassion. That the injustice to one community was an injustice to all and the suffering of some people would leave scars on all humanity and that humanity on earth shared a common global future.

GCJ is not about crossing borders or traveling for me, it is about breaking barriers of fear, distrust, indifference between me and people who were not like me and thus being a Global Citizen.