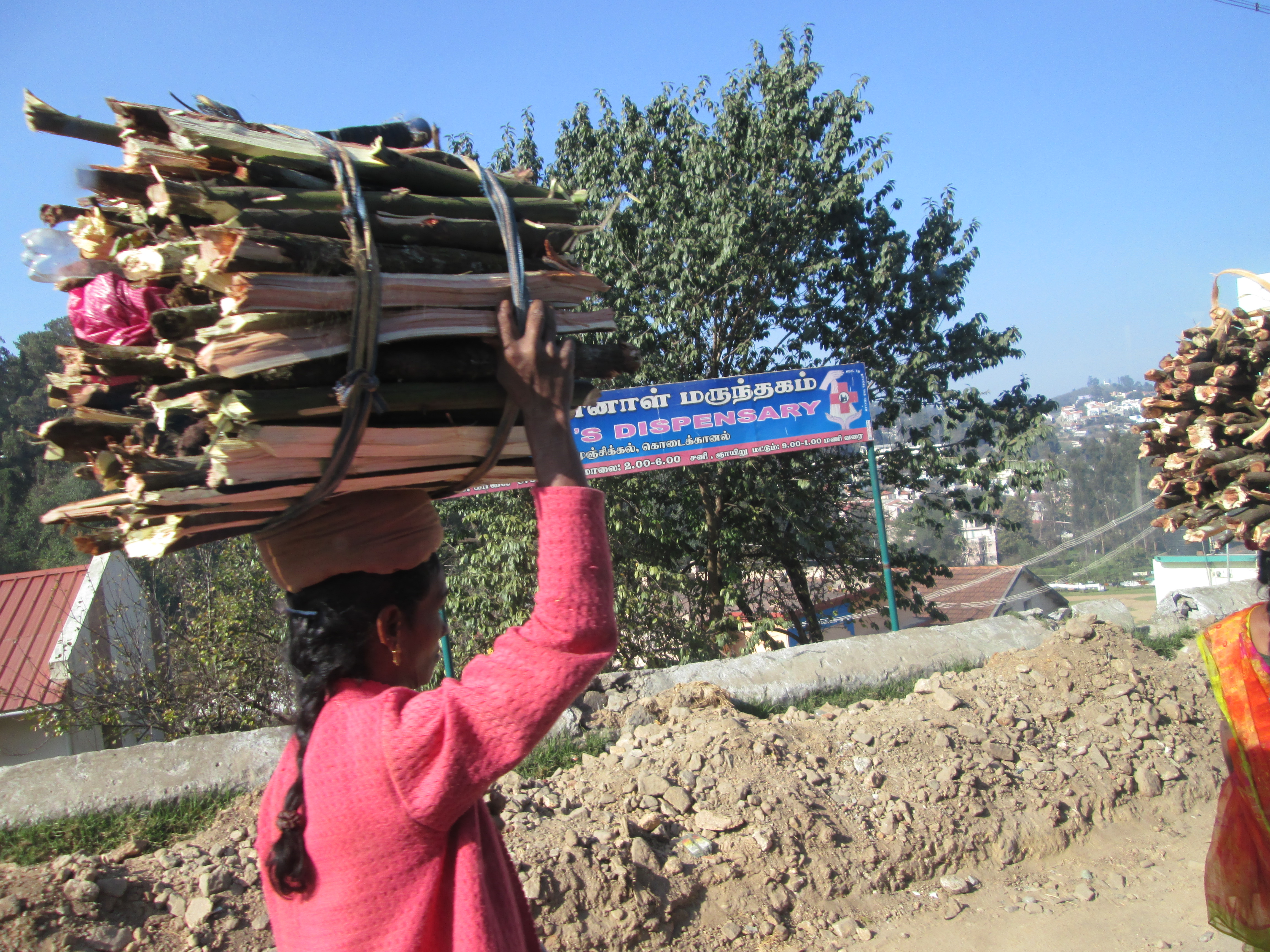 Once we were out of Bangalore – we began to experience the India street scene:  cars, motorcycles, cabs and humans laden with piles of sticks on their head etc. all adapt to the cows and dogs with loving care.  An Indian friend (Arun, who we will visit later in Pune) suggested we visit the Ashram of Ramana Maharishi, known as the Archangel of Silence and Listening.  How could I not stop there?  So we traveled to Tirunvannamalai for an overnight en route to Auroville. We arrived in time to find a hotel and then walk to the lovely ashram.  There was a palpable feeling of peace there.  Everyone present held a space and energy of calm and reverence.  As I sat in the inner temple of the shrine where Aruna achieved Samadhi (conscious exit from the body) and leaned against the wall, I was astonished to find the room felt like it was tilting and rolling… I check this sensation several times – moving away from the wall and then again leaning against.  Some incredible energy was there for me. 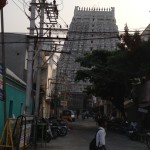 Later that evening we entered the huge Arunachaleswar temple,  The grounds are enormous (10 hectares), with 66 meter tall ( 13 storey’s) carved ‘pyramid’ shape structures at the four cardinal points and many buildings and temples inside.  In all temples in India you have to remove your shoes…  This then entailed several hours of walking on hard stone.  Oy I have tender feet.  We found our way to the first temple where you walk through a series of rooms, getting quieter, going deeper towards the sacred to the far end where a fire was burning tended by a large half naked monk who put an ash and red powder on our foreheads.  This is a fire of burning ghee, dedicated to the fire destroyer incarnation of the Destroyer of the Universe – one of the important Hindu gods.  We wandered through an area where a very loud and terrible sound system blared what seemed to be speeches honoring varying officials for some organization – the stage all lit up like a carnival.  Next area there were families with children running around gaily, happily eating sweets sold there.  Was this a temple or a park?!

Finally we realized we reached the main temple:  there was a booth to buy a ticket for all of 20 rupees (35 cents).  As we walked down the aisle bounded by metal poles we noticed many women on the other side so we thought, hmm, maybe we’re on the men’s side and we ducked over…  The line soon slowed and became very dense.  Dozens and dozens of people, including large groups of students, excitedly, noisily waiting.  Some in beautiful red and yellow saris, male monks nearly nude, families with babies…   Suddenly we saw a group quickly moving through the line on the other side:  are they cutting or ??  Ah ha: that was the privileged pay line we were meant to be in!  Ah well… We enjoyed interacting with the ‘plebeians.’   As we finally approached the end of the line there was another huge monk with a big naked belly handing out pinches of ashes… We could barely see into the inner chamber where the flame was kept:  that was for the ticketed ones!!!  We laughed and found ourselves surrounded by a group of curious young students who insisted we sit with them and eat the ashes we had received.  It was quite raucous trying to communicate and made the experience ever so eventful.  All in the entire temple wandering that night was quite surreal.

One of my favorite moments so far:  while in Tirunvannamalai, one morning our rickshaw driver stopped in the middle of our ride’s route and jumped out of the cab – Kathy and I just stared at each other in wonder and confusion, whatever is going on?  Then we noticed we were at one of the temple gates, and we saw him walk over to smudge himself with smoke from the sacred fire, touch the ashes to his forehead, and get a decorative bindee to put on the windshield: Love it! Spirit trumps fares and time…  Spirituality is completely woven in to daily ordinary life!

The next morning we discovered groups of students lining the streets:  they created a human chain of many miles encircling the town!!  They were taking a stand for democracy on this day of the Republic, celebrating the creation of the Indian constitution. 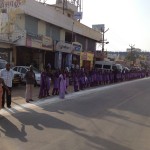 Then  we headed back to the Ashram so we could climb the mountain known as Arunachala and held as the actual body of Shiva with the fire at the heart of the now extinct volcano as his heart.   It’s cone shaped and quite steep for me.  I managed to hike up to the first cave where Sri Ramana Maharishi spent 37 years meditating.  (Very grateful I had schlepped my hiking poles).  On our way up we were greeted, adopted and guided by a lovely old man.  He was charming – and at times pushy and annoying, trying to get as much money as he could.  But who can blame him.  I enjoyed his company and his guidance.  We first went to his little hut where he lives and has a little shrine of gurus.  He led us in a chant, gave us a blessing, and gifted us with rocks from the top of the sacred mountain.  Then he guided us up…   pointing out rocks, little glens and rivulets where Ramana had mediated; pulling up lemon grass to give me for making tea; telling me many stories.  The hike was hot and rather steep:  I was grateful I had schlepped my walking sticks or I could never have made it.  The views were riveting.  The final destination –the first, lowest cave (and last for me – I didn’t make it higher) was lovely and peaceful, imbuing me with a deep sense of peace as I sat in the building anteroom just at the doorway in to the cave and meditated with the other half dozen or so people there.  I got to step in to the tiny cave as well.

Each day – each hour! – I am reminded of the challenges of communication and cross cultural exchanges.  I recently learned the term ‘cultural humility’ (as opposed to cultural competence), and now I am living it.  When understanding is successfully exchanged – it’s a miracle!  First – I find the accents here in Tamil Nadu quite impenetrable most of the time.  The quick, clipped syllables plus the retroflex and de-voiced sounds really throw me.  I do a bit better with people from the northern regions.  I am hoping my ear will get acclimated.  And even more impactfully (and mysteriously) confounding are the assumptions that permeate our exchanges –which are of course unknown and invisible.   For example, I made a plan to meet a friend at the school where she teaches.  I talked about how I could interact with the students and thus help them practice their English – and so I assumed that’s what would happen.  I was excited for the visit, which we agreed should begin by 2:30 or 3:00 the latest since school ends at 3:30.  Yet when I arrived at the planned 2:45… the students were all gone!  Off to sports!