During the last few days of my visit, we were joined by Molly from iLEAP :  it was through this small Seattle based nonprofit that I met Emmanuel, as they brought him to Seattle as a promising young leader from the developing world.  Molly came to Monrovia to get to see Emmanuel and his organization, PCO (Population Caring Organization), first hand.  Unfortunately she didn’t understand that you need a visa, so Emmanuel ended up having to run around to manage to get her one from this end and then send it to her in Kenya where she was visiting in the days before – He managed it well, but it became one more pull on him that took him away from the training.  PCO had so many logistics to juggle, they were often pulled away.  For me, as a sole trainer, the most stressful moments were those when I found myself without PCO staff to help translate or adapt what we were doing at crucial moments.  Still, we always managed to muddle through, and by the last day of training I felt so proud of the Core Team and all that we had accomplished

One evening I  got to visit Emmanuel’s home, share supper with him, and met his daughter Jerrine and nephew Stanford (who are living with him.  This warmed my heart – and gave me a chance to see a typical neighborhood more closely.  Behind Emmanuel’s house were shacks barely protected from the elements.  The well was down the street – no running water in any homes.  Electricity is purchased from a private agent:  $45/month per ‘limb’ — for power from 8 pm to 5 am – on a good night.  If you have an air conditioner or a TV you would need two limbs.  Think about this tonight after your hot shower and you lie comfy in bed watching DVDs at any hour! 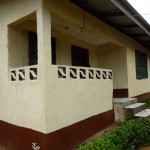 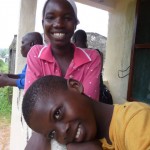 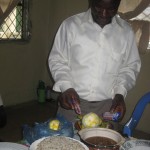 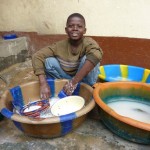 On Sunday we went to visit Teresa, one of the Core Team members who had sadly lost her oldest son to illness just the week before.  She is an amazing, powerful woman – one of the market women who helped end the war.  (Did you see Pray the Devil Back to Hell?  If not, do so ASAP!  Inspiring and compelling)  –as were a number of our Peacebuilders including several women who went to Ghana.  I was delighted that Sara and Stephen, two, other Peacebuilders, came to join our visit – I believe the group is really bonding and forming relationships. 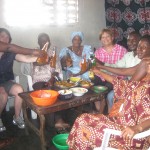 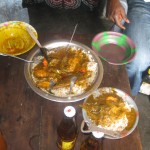 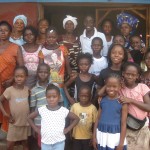 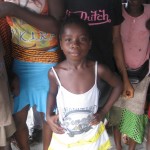 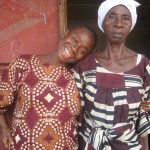 We were welcomed with open arms by Teresa’s whole extended family – from her mom to her grandchildren.  Her home seconds as a  little restaurant – and we were graced with a wonderful traditional meal, where everyone eats from the same bowl.  Everyone enjoyed the fun of taking lots of photos.  It was a warming and loving circle.

Last day of training was Tuesday, the day after the Community Summit.  In our debrief, one of the Peacebuilder shared an interesting experience from the World Café:  in his circle, one of the participants refused to take the talking object.  There was some discussion and initial insisting… Fortunately our Peacebuilder remembered to listen for the facts, feelings and values –and ultimately discovered that this person was from an ethnic group that believed taking a stone would bring misfortune and was a bad omen.  This led to a lively discussion in our group – We talked about the need to be culturally sensitive; how the actually holding of the object wasn’t essential, rather the taking of turns.  But then Ibrahim, another Peacebuilder, passionately interjected saying “No!  We need to leave all tribal practices and differences behind.”  Many in the group got triggered and the debate was off and running….  I reminded them to use the skills we have learned, to listen from the heart, to seek to understand not persuade…  When we were able to reflect Ibrahim’s deepest values, (“You are worried about divisiveness and are really wanting to find unity, so everyone can move forward to a peaceful future”) he completely relaxed – and then everyone was able to see they all shared that value and common ground – we went from debate to dialogue and speaking from the heart.  Ibrahim and the group came to understand that honoring culture and allowing for different practices didn’t need to divide.  It was a great reminder to all about how easy it is to polarize and get pulled into debate – and how the practices we are learning can create the turning point and bring understanding. 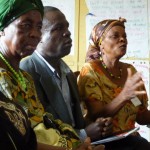 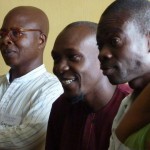 This final Graduation day ended with great celebration.  We were honored with the presence of Dr. Latard, the Director of the Interfaith Church Council where we held our training (and who has offered Office space to PCO in the same building for a generous affordable price);  this wise elder gave a stirring speech with encouraging words for the Peacebuilders and the important role they need to play to manage the challenges ahead with elections coming to Liberia in October.   The political parties thrive on dividing people along ethnic lines and the youth are especially vulnerable to their offers of money and small gifts to get their support.  There is concern that violence will erupt since with so many candidates (up to 27 for President right now!) there are bound to be many many disappointed groups.  Many of the Peacebuilders are engaging in voter education around such issues. 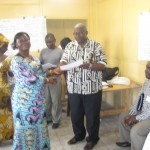 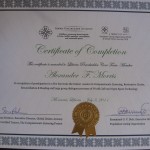 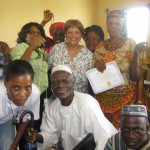 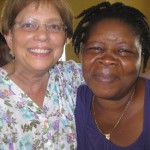 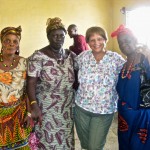 The Core Team was thrilled to each receive a gold-seal certificate – and a set of chimes.  Far East Handicrafts donated 35 sets of chimes so each of our Peacebuilders now has one.  They are founded on Fair Trade principles and support the making of new items in traditional and ancient art forms plus support many medical and educational aid projects in Nepal. 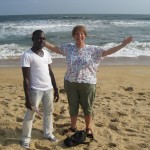 Finally, training was ended!  All responsibilities were fulfilled!  We got to walk to the beach just down the street – yet my first time there!  And, joy!  We had a party my last night!  What fun!  We came to my little apartment and the guys made the dinner:  Alex Morris was the chef, Emmanuel was sous chef, and Madison did the dishes (reportedly the first time he washed dishes at a sink with running water.)  The bar-restaurant upstairs happily loaned us a big pot and extra plates.

The next day we did a little shopping (I bought a flipchart for PCO!) and some debriefing.  I was chagrined to learn that what I thought was welcomed coaching from the side felt uncomfortable for two of our Peacebuilders at the Community Summit:  I thought we had made clear agreements at our training that I would step in whenever it seemed needed, to support them and the process in this their first experience at facilitating large group dialogue…  But I now learned, the more culturally appropriate way to partner in public would be to quietly go up to the person and whisper in their ear, rather than to add remarks publicly.  Sigh.  It was painful to learn this after the fact!  Cross cultural communication is such a challenge!  You just don’t know what the invisible barriers are until you slam into them.

This is all part of the Journey of being a Global Citizen.  It is never easy, but always ultimately rewarding in growing and learning and deepening the possibilities for mutual understanding and ultimately building a sustainable peace — especially in a nation as challenged as Liberia, with its post-war devastation and trauma.    I think our whole circle of Peacebuilders, with all of our diversity, learned so much from each other.  I was heartened by the commitment the group expressed, and their willingness to continue their monthly practice groups even when our small funds run out in September.  May their skills deepen and grow and may they spread the practices they learned far and wide throughout the counties of Liberia! 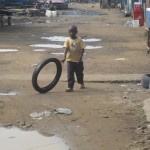 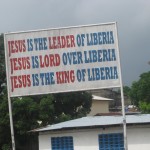 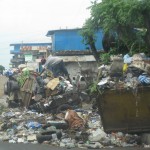 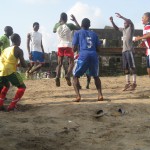