Yesterday’s marathon of meetings went very well:  We began at the Ministry of Health and Social Welfare and were promptly introduced to the best program for us to connect with — Community Support Services, Psychosocial and Community.  Their director was very interested in our work and would like a train-the-trainers of his team of social workers.

We were well received by the PBO (Peace Building Office):  this time they really seemed to hear and appreciate that we have something unique to offer.  We are exploring how to incorporate some of our training into theirs, to make it more experiential and work on the ‘inside out’ personal transformation.  They are key players, as all the UN Peace funds flow through them.  They are beginning to establish Security Hubs – one per three counties – which will aggregate police, immigration, security teams – so they are de-centralized and not all in Monrovia.  They want to do community outreach and dialogues…

We also met with the Commissioner Oversight (Program / Planning) from the Independent National Commission on Human Rights (INCHR) – a great guy who had a compelling personal story of having to flee the country.  He was rescued by Amnesty International sending him funds to flee – and ended up working for them for some time.  His Commission is tasked with taking over and completing the work of the Truth & Reconciliation Commission:  quite a daunting challenge, which includes establishing Reparations (challenge:  how to determine who what gets and how much?  What measurements?); Prosecution of war criminals ( tricky business when so much of the country was implicated on various sides and many of the warlords are currently sitting Senators; should they do this alone or with International help?); Memorialization.  And finally, the part where we may get engaged:  Reconciliation and Palaver Hut Forum Discussions. 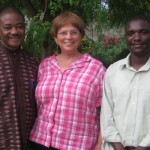 In the cool shade of his garden, encircling a tree, we enjoyed a fascinating visit with Emmanuel Bowier, a wonderful man who is an expert on Liberian culture:  we may partner on the INCHR proposal.  Emmanuel B explained how originally the Palava Hut process was a circle ‘owned’ and initiated by the community.  In more recent years, it has become more Chief focused and run – which has undermined its effectiveness as many of the younger generation don’t have much regard for chiefs or elders.  They grew up in the chaos of the civil war; many were combatants or forced companions to combatants.  They didn’t have any experience of an intact culture.  And women hold little trust with any justice system, traditional or legal. There is indeed often abuse.  Plus the chiefs often ask for money.  So there seems a genuine opening and need for Restorative Circle practice – which in a way is bringing them back to their roots since it is so akin to the Palava Hut.  One traditional practice that E.B. described seems like a brilliant option for RC:  the conflict parties would typically bring a Respresentative (perhaps their sister or mother or father) who would speak for them, rather than their speaking directly.  This makes especial sense in Liberian culture which tends to be much more indirect in communication style.  And it creates even greater safety – very wise in so many cases, such as a victim of any violence in a Circle with the actor.  As an aside, EB’s personal history reflects a common challenge in Liberia where past affiliations make it difficult to find current day roles. In the early days of the overthrow of the government when hopes were high for a more just and inclusive Liberia, EB served as Minster of Communications under Samuel Doe.  Of course that regime became increasingly brutal and was overthrown by factions that threw the region into brutal civil wars for 16 years.

For our last meeting, we met again with Grace – the County Superintendent for Montserrado (which encompasses Monrovia – the largest City that holds over half of the country’s population).  She was very receptive to our ideas and thoughts about next steps with the Peace Island issues.  Emmanuel can help set up Peace Cells, as he did in Budumbura Camp – and now deepen the dialogues using Compassionate Listening.  Also, help establish Restorative Circle practice:  we talked about how the Pre-Circle process is so important – so before the whole Circle comes together – as more or less they did earlier in the week at their Town Hall – each party is fully heard and listened to.  So when they come to the meeting, they may feel a bit more open and ready/able to listen to the other…  We also suggested beginning each meeting with a silent mediation – reflection, setting intention, etc. – after the prayers, which often become fiery sermons that in fact stir people up.  Grace was excited by our ideas and asked Emmanuel and team members to meet the Election Team she’ll send out there on Wednesday!

We are encouraged at the level of interest in the work we are doing with Compassionate Listening and Restorative Circles – though so far no concrete signs of funding.  Emmanuel’s strategy will be to volunteer and work with some of these groups in the hopes that then they will find a way to fund continued partnership….  Our funds will soon run out…  To continue the program with strength takes about $1000/month to cover tiny staff stipends, phone cards, gas. transportation & food for a one day gathering of the core team, etc.

As I reflect on all these possibilities — the challenge for me is to realistically assess the capacity and ability of the Core Team here:  what are they ready to contribute and take beyond their own communities at this point.  Would such extended activity, i.e. with national programs, require more training and or mentoring from me directly or can they go it on their own. Would I want to return and how soon could I do that.  And of course – how would that get funded. Are there others in our Compassionate Listening circles who might want to get involved?

Today I spent working with a small group of our most skilled Core Team members – coaching them to facilitate Monday’s World Cafe and Open Space – and getting all the posters and materials prepared..  We expect over 100 people!  Excited!  It will be great to see them facilitate.

Well, about time to turn in:  I am a bit tired this evening, as I had a rough night – LOUD music till 1 am that was not only insanely loud (shaking the walls) – but AWFUL.  I mean I hated it!  And then – I was plagued by a mouse in my little studio apt.  I’m trying to befriend the mouse… but it is so jarring to be relaxing and then be caught-surprised by something scurrying by in the corner of your eye.  It makes me uneasy in bed at night…   They have set up ‘glue’ traps (little strips of paper with glue) and plugged in ultra-frequency emitters that are supposed to make them want to leave… Many sightings last night and this morning…. So far none this evening.  So I am hopeful!!

Pictures of my abode – including the hot water heater that never did manage to provide hot water!!!  The view was great (or should I say grate)… and the sounds of the ocean lulled me to sleep.  The mattress proved to be a great deal for my chiropractor! 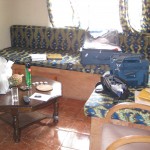 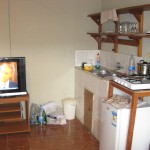 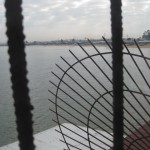 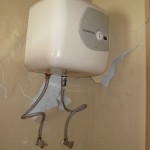 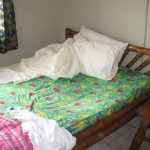 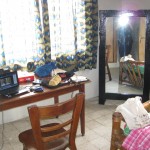 Getting to Know Monrovia Communities

Want to join the discussion?
Feel free to contribute!